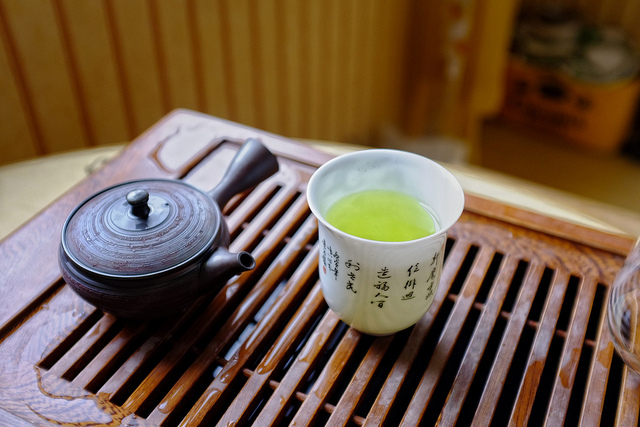 The tea I’m going to be reviewing today is called Gyokuro (pronounced Gee-yo-ku-row), a green tea grown in Japan. The name means jade dew in Japanese which refers to the color of the tea after brewing. Most of the tea produced in Japan is green tea. There are three main types of Japanese green tea: Sencha, Gyokuro, and Matcha. They differ not in the variety of tea plant they’re grown from, but in the method of growing and post-production.

Sencha is grown like most other green teas and is exposed to the sun up to the point of harvest. The first harvest of Sencha is called Shincha. During the winter, the tea plant stores it’s nutrients in the plant and this first harvest contains these concentrated nutrients. These young leaves result in a tea low in caffeine and catechins, and high in amino acids. Low grade Sencha leaves that are the last to be picked off the plant are called Bancha. This variety is a good daily tea that doesn’t break the bank.

Gyokuro also starts its life in the sun, but is shaded for the last 20-30 days of growing. Poles are erected within the tea fields during early to mid April. Sheets of semi-transparent material are then drawn over the poles, covering the tea in shade. Today, most of these sheets are a type of black plastic mesh that the Japanese call kanreisha. Before this type of sheet was available, Gyokuro farms were covered by sheets of rice straw, painstakingly woven together over the winter.

In honor of tradition, some Gyokuro farms still use this straw method and Gyokuro grown in this way is called Hon Gyokuro. When it rains the water seeps through the straw, drawing out its nutrients into the soil for the tea plants to absorb. The growers claim that this results in a much richer and more nutrient dense tea. This type of Gyokuro is much harder to produce and is typically only sold in specialty tea shops.

When tea leaves are deprived of sunlight, several important chemical processes take place in the plant that result in Gyokuro’s distinct look and flavor. Since the leaves have a harder time carying out photosynthesis in the shade, the plant overproduces chlorophyll molecules to compensate. Chlorophyll is what makes leaves green and this is why Gyokuro has such a deep green color.

There is also an important amino acid called theanine that is produced in the roots of the tea plant and then transported to the leaves for storage. Normally, sunlight that hits the leaf of the plant breaks these amino acids down into catechins such as EGCG. However, since Gyokuro is shaded a higher percentage of theanine and other amino acids are left preserved in the leaf.

Theanine closely resembles glutamate on a chemical level. Our tongues actually have specific receptors for glutamate-like molecules to bind to and we experience foods high in glutamate as having a distinct flavor. The Japanese refer to this flavor as Umami, but the closest word we have for it in English is savory. This umami taste is naturally present in many meat broths and some fermented foods. Monosodium Glutamate, or MSG, was an attempt to capture the taste of umami.

Most Japanese tea is grown in southern Japan, where the weather is a bit warmer and more hospitable for growing. Shizuoka prefecture is the largest producer of tea within Japan, but much of the tea they produce is Sencha. There are a few towns that specialize specifically in growing premium types of tea such as Gyokuro and Matcha. These towns are Uji in Kyoto prefecture, Yame in Fukueka prefecture, and Okabe in Shizuoka prefecture. 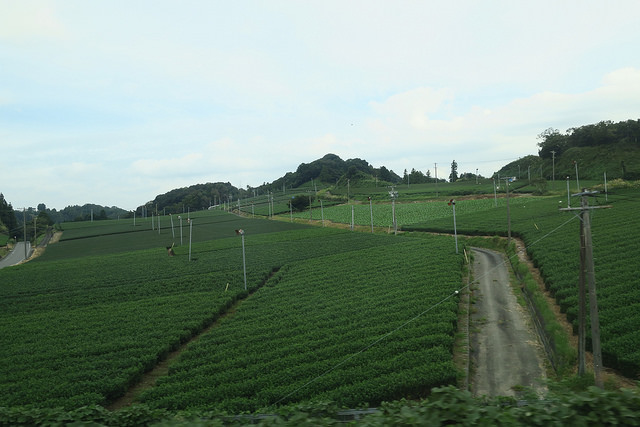 Uji is the longest producer of Gyokuro tea and is where the tea was discovered. Many of the tea farmers from Uji used to cover their tea plants with straw during the winter to protect them from frost. During one trip to Uji in 1835, the 6th owner of Yamamotoyama Tea Company noticed that some of these tea leaves had a sticky texture. He decided to try rolling them into little pellets and brewed them. He was amazed at the flavor, but was never able to repeat the process. It was later discovered that this shading of the tea leaves is what caused the unique flavor and the process was gradually refined into what it is today. If you’re interested in the history of the tea, check out the full story here.

Matcha, or tencha as it is sometimes referred to, is similar to Gyokuro. The same tea leaves are used for both, but the post-processing of the leaves are a bit different. Both leaves start their journey with a quick 20-30 second steaming to prevent oxidation. The leaves that will make Gyokuro are then tumbled to break down the cell walls for better infusion, machine rolled into thin cylinders resembling pine needles, and then dried. Tencha leaves are instead air dried and then ground into a fine powder. This powder can be whisked together with hot water to create a rich, frothy, green beverage. Matcha contains the highest theanine levels of any tea because you are drinking the Gyokuro leaf itself when you consume Matcha.

Japanese tea ceremonies frequently use Matcha and occasionally Gyokuro. Traditional tea ceremonies that utilize Matcha are known as chadō, whereas when Gyokuro is used, the ceremony is named senchadō which translates to the way of the sencha.

You can find high-grade versions of both Gyokuro and Sencha, but Gyokuro is generally a bit more expensive. Gyokuro can be found for $20-30, but more rare varieties can go for as much as $100 for 100 g. If you want to buy some, I would recommend the vendors O-cha and Yunomi. I am not affiliated with either of those companies. Both specialize in Japanese tea and ship worldwide straight from Japan.

Depending on where you live and how much you want to pay for shipping, it can take up to a few weeks to ship. So if you want to enjoy Gyokuro for a special occasion, you would be best off ordering several weeks in advance.

When I bought Gyokuro for this review, I hadn’t done much research ahead of time and kind of picked a vendor at random. I ended up buying this tea from Elmwood Inn. The tea I got was high quality and I was satisifed with it, but in the future I will likely buy from a vendor that ships straight from Japan and has a larger selection.

The Gyokuro I ordered arrived a little over a week after payment. When it arrived, it came in the mail bundled together with two other samples. The Gyokuro was in a ziplock bag, with a paper outside. I’m guessing this is to keep the light out and keep the tea fresh. The first sniff I got of the tea reminded me of freshly cut wild grass or hay, with maybe a hint of dried seaweed.

I was eager to try the tea after it arrived and followed the brewing instructions on the bag it came in. Since we are somewhat limited on brewing equipment in my house (something I’m working on fixing), I just emptied the tea out of another teabag and put this one in. Later I found a strainer from Teavana that I’ve been using which is similar to this Yoassi strainer (buying through this link helps support the website). These types of strainers work nicely for quickly brewing inside a typical 8 oz mug, as they allow plenty of space for the leaves to unfurl.

Upon the first sip, the deep umami flavor is introduced and spreads across your tongue. I would liken the taste to unsalted seaweed, or the taste you get from chewing on straw. There is a hint of sweetness, but it does not overpower. It has a texture that is smooth and mellow, maybe a bit waxy. The aftertaste is pretty mild and if you focus you can still feel the umami. As you get further down the cup the umami and grass flavors get stronger and stronger. The last few sips are somewhat heavy and full-bodied.

There are several methods for brewing Gyokuro tea and the advice will vary depending on who you ask. Most of the brewing methods do agree on a few key points. Gyokuro is a very delicate tea and should be brewed at a lower temperature than you would brew even other green teas. If it is brewed too hot it brings out the grassy flavors more than the umami. You also want to brew this tea for a relatively short amount of time. 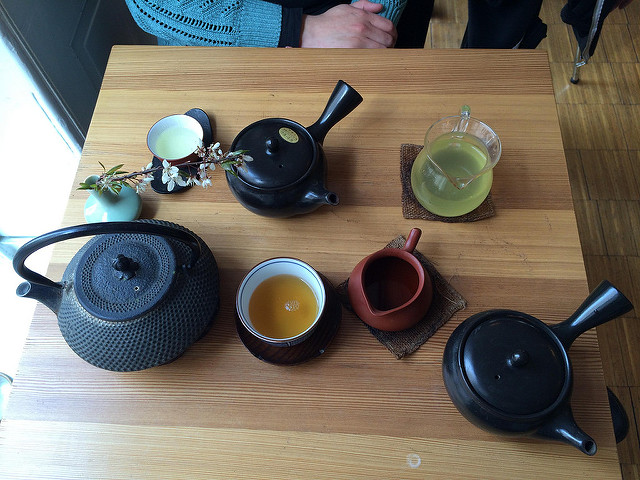 If you want to enjoy this tea in a ceremonious way brew the tea with a lot of leaves, little water, and at a very low temperature for several minutes. Since very little water is used you don’t want to use a strainer. Ideally you want a pot that lets the leaves sit in the bottom and strains the tea as it is poured. The Japanese use two types of pots for this: the houhin and the shiboridashi. If you have one they work great for this brewing method.

This brewing method only produces a bit of tea, but that little bit has an insane umami flavor. Once the first brew is done feel free to do further infusions on the leaves following the modern brewing parameters. Some people even eat the leaves after several infusions. They have a very mild, savory, vegetable-like flavor and are packed with nutrients.

The modern brewing method is fast and easy. You can also use it with virtually any kind of strainer.

Gyokuro is a great tea to cold brew since it is naturally suited for lower temperature infusions. The science behind this is that caffeine and bitter catechins are soluble in hot water, but not so much in colder water. On the other hand, amino acids such as theanine are moderately soluble in colder water. Cold brewing will result in a smooth tea with a subtle umami flavor.

A large teapot works best for cold brewing, but any kind of container works. Just keep in mind that if you use something like a mason jar, you will need to figure out some way to filter off the leaves.

Another interesting method of cold brew you could experiment with is combining the tea with only ice inside a tea pot and waiting until the ice melts to consume.

Since Gyokuro is more of a premium tea you will want to store it properly to get the most out of it. You’re best off keeping the tea in a cool and dry place out of the way of the sun. Humidity can oxidize the tea and it’s not recommended to store the tea in the refrigerator because when you pull the tea out condensation is pulled into the container. Gyokuro should be enjoyed soon after it is opened. Ideally within 3 months, but even if you have some that is several years old it can still be enjoyed.

I really enjoyed this tea. It is probably not best for people who dislike the grass flavors in tea or who like a more fruity/floral tea. If you enjoy green tea or consider yourself a connoisseur of tea definitely give it a try. This tea really is in a category of its own with its deep umami flavors. I don’t know if I would use this tea on a daily basis, but it is a great choice for special occasions or a tea ceremony with friends.